I haven’t been seeing many beggars around lately, except for the LKF Plastic Bag Lady and possibly the Wanchai Homeless Beggar whom I think I spotted in Lan Kwai Fong the other night.

However, I did see a rather upbeat and jolly beggar a few weeks ago in Tin Hau just outside the MTR station on King’s Road. He had picked a good location, since sizable crowds would gather while waiting to cross the busy intersection.

At first glance, the Tin Hau Harmonica Elbow Beggar (you’ll understand the name soon) looked like a normal person who was just playing the harmonica out of his elbows (a way to get attention perhaps) but upon closer inspection, I realised that he didn’t have any forearms — just little stumps after the elbow joint.

While playing his tunes, he was also side-stepping to the music and grooving along, not to mention making eye contact with everyone who passed. It was pretty cool to see a beggar getting so into it, unlike the more dormant types like the Mong Kok Tree Trunk Stumps Beggar or the Wanchai Parma Ham Leg Beggar. Keep it up, dude!
November 7, 2011April 25, 2020 | Erica Fong

The other day, I was walking along the bridge to Central Pier when I came across a Hong Kong beggar lying face down near the entrance to IFC on the Apple Store side. He seemed “normal” enough: missing both legs, dressed in dark clothing, with disheveled short black hair. As usual, no one took notice, and since I was in a rush to get to The Watermark, I sped walked my way past too.

On my way back though about an hour later, I found myself walking behind a guy in a mini-buggy, which was essentially a motorized red tin box on three wheels, and guess who was driving? The same legless beggar as before!!

Usually, I try not to stare long or do double takes with beggars since it might make them self conscious, but I couldn’t help it when I walked past this beggar on a buggy. Not only was he in possession of a pretty awesome ride, he was also checking text messages on his phone, which despite being a Nokia had a pretty pimpin’ gold keypad.

I walked next to his buggy for a while to see if I could read his text messages (I couldn’t), and to verify if it was in fact the same guy, which I’m pretty sure of since he was missing legs at the same spot as the other guy.

Suddenly, I didn’t feel so bad for him anymore. Could it be, that he is perfectly okay with the way he is? Texting his wife to tell her he’ll be home tonight earlier than usual? Or is he plotting with his pimp where he’ll lie face down to pull at our heart strings next? And … where does he usually hide his buggy? Oh mysteries…

After another long day at work, I came across another beggar on my to the Central MTR. Seated on the right side of Theatre Lane near exit D2 of Central, the Central Handless Burnt Eyes Beggar has severe burn marks on his head, especially around his eye sockets. 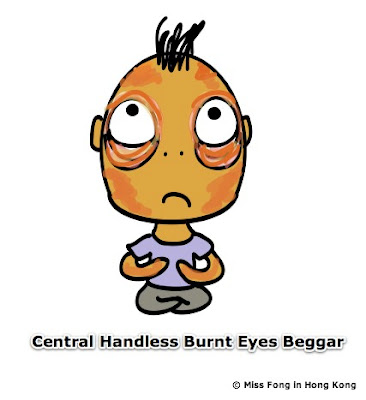 He looks up at passerbys with a forlorn expression on his face, and shows off his (missing) hands which have apparently been cut off. His head is also quite bare from having been burnt, and as I recall, he’s only got a tuft of hair on the top of his head.

Although he is in a high-traffic location where many OL (office ladies) and OM (office men?) pass by, I’ve never seen anyone stop to give him anything. So if you’re reading this, please stop by Maxim’s, McDonalds’ or Marks & Spencer nearby to get him something nice!

Today I came across a beggar at one of the busiest pedestrian crossings in Hong Kong: Argyle Street X Sai Yeung Choi Street. At first, I wasn’t sure how I noticed him given the crazy amount of people everywhere, but on second thought, I must have been watching my footing while crossing the road, which is how I came to notice a gingerbread skin-toned person lying face down on the ground.
This beggar, whom I refer to as the Mong Kok Tree Trunk Stumps Beggar, lay perfectly still amidst all the human traffic around him, and never once looked up to cast a pitiful stare. Instead, he let his legs stumps do the talking, which were surprisingly thick and meaty. If I were to guess, I’d think he was some sort of runner or athlete before he was kidnapped and/or forced into begging. He must be extra upset for losing his (probably) muscular legs, which might be why he keeps his head down at all times.  😦
July 19, 2010April 25, 2020 | Erica Fong

This beggar has got to be one of the most graphic, gruesome and gag-inducing guys in Hong Kong. Usually seen on the bridge going towards the Immigration Tower from the Wanchai MTR Exit A5, I had almost forgot about him since I hadn’t seen him in a long time. However, one look was all it took to get his image emblazened into my head again.

You see, the Wanchai Parma Ham Leg Beggar is aptly named because he has a huge, rectangular raw flesh wound on one of his legs, which he displays proudly by extending it into rush hour human traffic. One just can’t help but stare at how deep, red, wet and fleshy it looks (not to mention painful)! Apparently, he (or his pimp) makes a new cut every morning so that the wound is fresh and bloody. Today, the wound is around 1-1.5 inches deep and sometimes, it even looks like he’s been cut to the bone.

At times, the Wanchai Parma Ham Leg Beggar can be seen with a piece of old cloth hanging near him on a makeshift clothesline, which has been stained multiple times by his bleeding wound.

To be honest, with the wide range of beggars in Hong Kong, it’s really a shame that this guy has to endure so much physical pain just for a few bucks. I mean, I don’t think he makes any more money  than the old lady down the street who’s only kneeling down and pretending to be homeless. If I were him, I’d stop the painful cutting, but of course, it’s probably not his decision to make.

Anyway, do pay our latest beggar a visit and see whether you still have your HK-sized appetite afterwards. I, for one, have lost all my cravings for parma ham…

Our latest beggar is the LKF Stump Fisted Beggar, commonly seen on stairways in and around Lan Kwai Fong. This includes the stairs leading up to the LKF Tower, the stairs going down from Yumla to Baby Buddha, and of course the stairs around the LKF public toilets.

As his name suggests, this beggar has no thumbs or fingers and usually looks gloomy and sad. He has a plastic cup pressed between his stumps for collecting spare change, and he’s also known for shaking his stump fist at you while you walk by. Once, he even used it to prod @mystifize, immediately putting her into turbo mode as she raced down the steps.

It’s unknown how much the LKF Stump Fisted Beggar manages to make each night, as I’ve never seen his cup even half full. Perhaps he would make more money by putting his stump fists into good use, such as becoming a masseuse, bread kneader or African drummer…

This beggar needs no introduction. Seated at the top of one of the busiest MTR exits in Hong Kong (Mongkok E2), it’s a miracle that he doesn’t get trampled by the millions of emo teens, sneaker freaks or gadget addicts that frequent the famed Sai Yeung Choi St. area each day.

The Mongkok Foot Scrunching Beggar sits on a square of newspaper with his head hung low and his crutch laid out in front of him. While one of his legs is folded under him (probably crippled), his other leg is kept active by a constant scrunching and unscrunching motion in his toes.

Whenever I see him, I swear I can feel the pins and needles and that slow, painful ache that you get from sitting too long. I mean, can you imagine sitting there all day long, scrunching your toes over and over again, just to keep the blood flowing in you, while tens of thousands of oblivious people pass you by?

He definitely picked a prime location to beg in terms of the sheer number of human traffic, but I’m not sure how many of those people even notice him, given that their minds are probably cluttered with other life-threatening dilemmas (e.g. HTC Hero vs. iPhone?? Nike vs. Adidas?? Straight or wavy perm??)… 😛

This next beggar is a very talented and skilled individual. I saw him last Saturday night in Mong Kok’s Sai Yeung Choi Street outside the Broadway Cinema, writing inspirational messages on a scroll.

For some reason, this beggar does not have any hands, just a bit of forearm on both sides. He uses them to support himself as he proceeds to write inspirational messages in beautiful, perfect Chinese characters upside down. He does this by taping a paintbrush securely to one side of his glasses.

At first, I did not notice what he was writing, but upon closer inspection, I slowly made out enough characters to realize he was writing about how life was a gift, that it was short, and that you should take every opportunity that you have.

He truly was an inspiration as he didn’t seem to be bitter at all about his situation, and even took the time to look at and thank every person who had dropped some coins into his hat. Definitely someone to give a nod to the next time you are in MK!