It’s lychee season and since I have been eating an insane amount of them (no nosebleeds yet!) I was inspired to draw this: 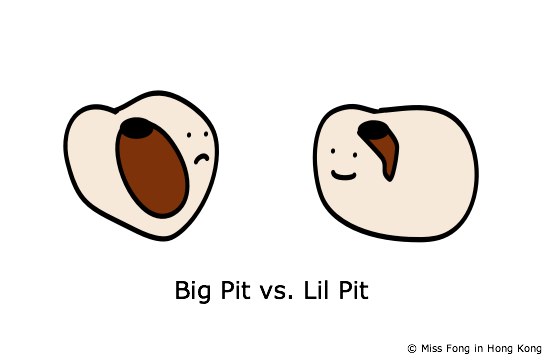 My tribute to Joshua Wong, the 17-year-old political activist in Hong Kong who is an inspiration to so many. Read more about him here. 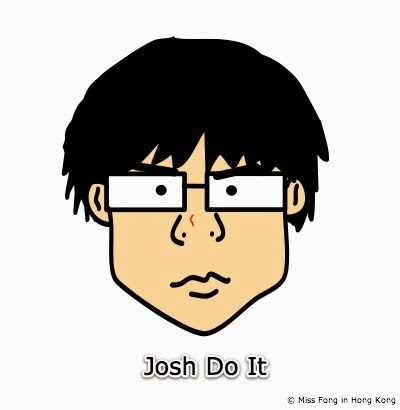 We are not seeking revolution. We just want democracy.

December 13, 2012April 25, 2020 | Erica Fong
So, besides selling fook-less Xmas tree ornaments at the Handmade HK bazaar last weekend, I also had a small selection of Xmas cards on sale that I designed myself 😀 (no fook there either, sorry lady)!
There are five designs in total:
Thanks to everyone who came by and picked them up! I hope you’re enjoying your cards/ornaments/bow ties/fimo! 🙂
Also big thanks to the people at Asia Society Hong Kong for stocking my cards! They’re now on sale at the gift store right outside the ultra-hip and happening’ AMMO, so be sure to take a peek while you’re on a pee break (the store is in between the restaurant and the restrooms)! 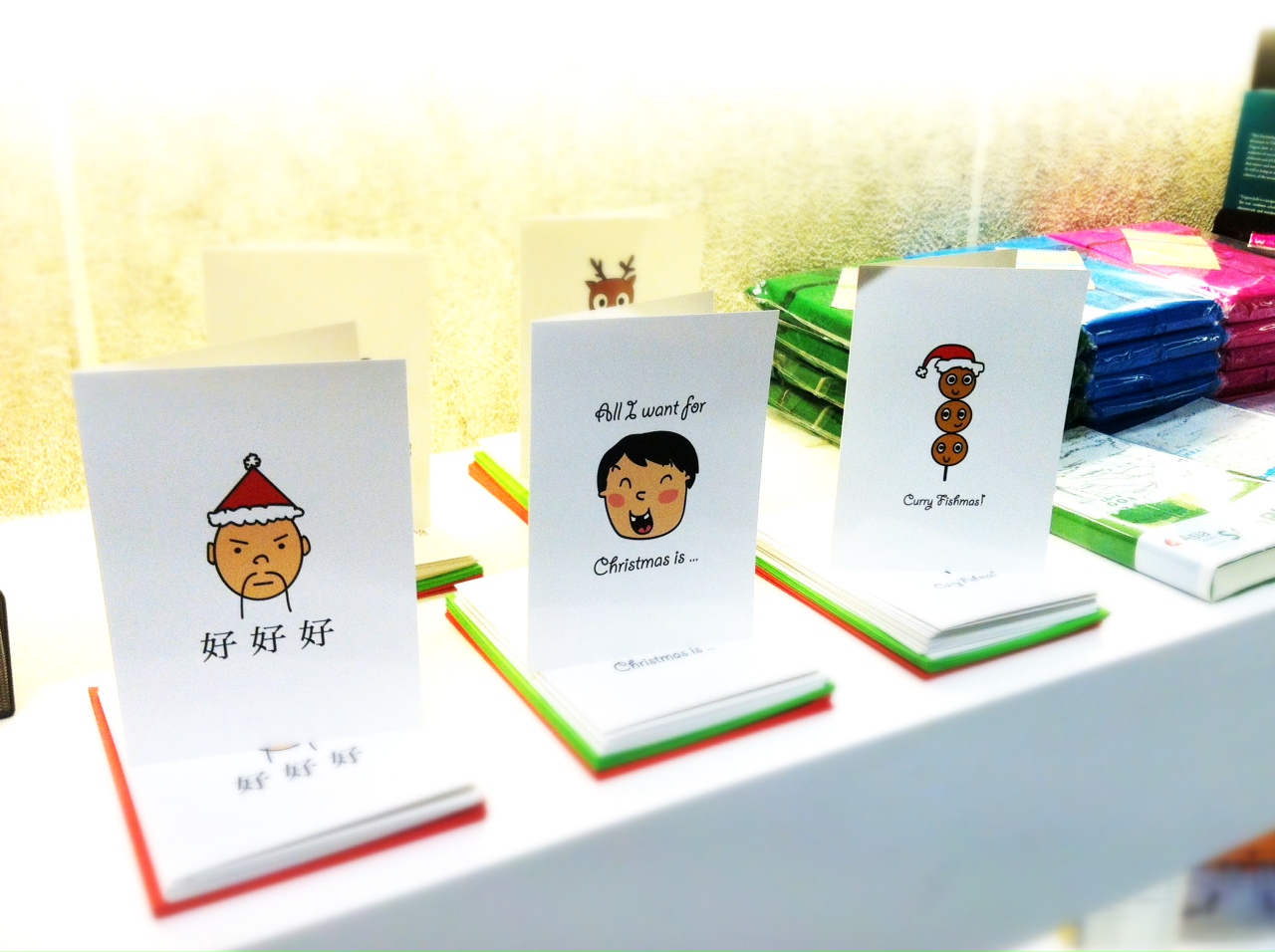 I haven’t been seeing many beggars around lately, except for the LKF Plastic Bag Lady and possibly the Wanchai Homeless Beggar whom I think I spotted in Lan Kwai Fong the other night.

However, I did see a rather upbeat and jolly beggar a few weeks ago in Tin Hau just outside the MTR station on King’s Road. He had picked a good location, since sizable crowds would gather while waiting to cross the busy intersection.

At first glance, the Tin Hau Harmonica Elbow Beggar (you’ll understand the name soon) looked like a normal person who was just playing the harmonica out of his elbows (a way to get attention perhaps) but upon closer inspection, I realised that he didn’t have any forearms — just little stumps after the elbow joint. 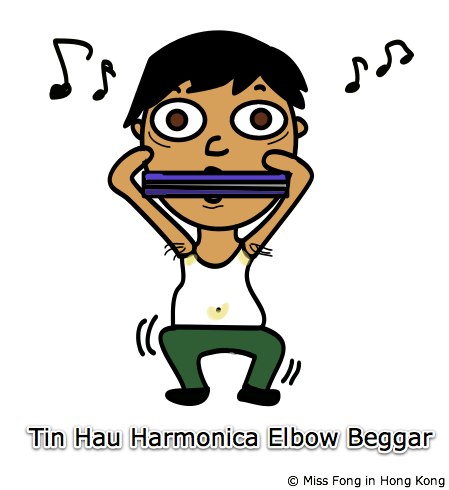 While playing his tunes, he was also side-stepping to the music and grooving along, not to mention making eye contact with everyone who passed. It was pretty cool to see a beggar getting so into it, unlike the more dormant types like the Mong Kok Tree Trunk Stumps Beggar or the Wanchai Parma Ham Leg Beggar. Keep it up, dude!
May 22, 2012October 31, 2016 | Erica Fong

I know it’s rude to stare, but last night, I saw something that I just couldn’t tear my eyes away from.

He was standing across me in the MTR, looking rather normal for a Hong Kong dude (glasses, short black hair, T-shirt and jeans, and holding an iPad). It was probably his iPad that drew my eyes toward his wrist, which is how I noticed that he was wearing some kind of hairy wristband.

‘Pretty neat,’ I thought to myself as my eyes zoomed in, wondering what kind of material it was made of. It was super thick, so maybe faux fur? But then, the sudden realisation hit me that that was no wristband — that was a GIGANTIC rectangular MOLE wrapped around his wrist with a thick forest of hair growing out of it. 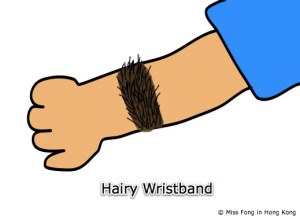 Feeling a mixture of shock, fear and awe (it was, after all, the biggest and hairiest mole I’ve ever seen), my eyes were locked onto that dark patch of densely grown hair until its owner stepped off the MTR. Where he’s gone, I have no clue, but one thing’s for sure — I won’t be forgetting the hairy wristband anytime soon.

There’s a girl in my building whom I just had to immortalize into drawing. I see her maybe once a week, sometimes less, but each time, I’m shocked at how BIG her head is. Not only is it big, it’s also totally block-shaped, thanks to her square jaw and thick, black hair that’s cut and blown in the shape of a box.

Sometimes, I’ll see her strutting down the street alone with a big goofy smile on her face, apparently feeling very happy about herself despite not having anyone around (that always creeps me out) but once our eyes meet and she catches me staring, her expression immediately darkens and she casts a glare at me like she wants me dead!

I could be wrong, but her glare also seems to say, “What are you staring at, you jealous of what I got?!” It’s downright creepy and I usually divert my eyes right away. Maybe it’s all in my head, but I highly doubt it as my colleague has spotted her before and got “the chills” too. What have I ever done to you, Little Miss Blockhead?

As mentioned before, I am a total cockroach magnet. At my old job, the cockroaches LOVED my corner cubicle and now, we share our tiny SoHo office space with a very fertile family of miniature roaches, who have been spotted anywhere from my desk to the cubicle walls to the secretary’s phone.

Luckily, the mini roaches mostly come out at night when we’ve all gone home for the day, but sometimes the next morning, we’ll find them in the strangest places — like in our coffee mugs. Yup, one morning, I found two dead roaches in the bottom of my coffee mug when I was rinsing it out, and I’m guessing it went a little like this:

Big Roach tells Little Roach how nice it would be to go skinny dipping in a creamy cup of Hong Kong style coffee. 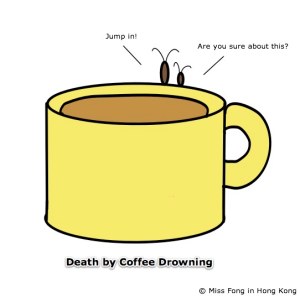 Little Roach struggles to keep afloat in the coffee, while Big Roach relishes in the fact that there’ll soon be one less mouth to feed in the “megaherd” of roaches, meaning more crumbs for him! 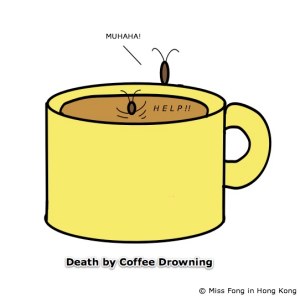 Big Roach loses his footing while laughing and slips into the coffee as well, where both of them die a slow and painful death since they are highly caffeinated and do not slip into unconsciousness until about an hour later. 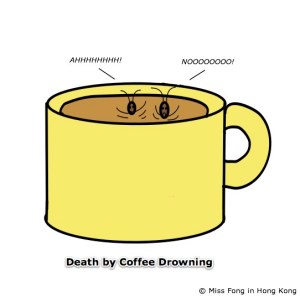 Moral of the story? Roaches should wear slip-resistant footwear when walking on slippery surfaces like coffee mugs. Crocs, take note, you’ve got a new set of customers (with six feet each)!
December 18, 2011October 31, 2016 | Erica Fong

No matter what time of year it is in Hong Kong, you’re likely to see one of the city’s most infamous tenants crawling around: the cockroach. In the summer, they are out in full force, scurrying along sidewalks, climbing up the walls, and sometimes (if you’re unlucky) flying right into your line of sight.

Now that it’s winter though, cockroach sightings are much more rare, but that doesn’t mean they’re gone. In fact, most of the times I see cockroaches these days is when they’re dead. Squished, flattened, stomped on, or worse, have you ever wondered what actually happened right before the cockroach was killed?

Introducing … Cockroach CSI: an investigation into the lives (and death) of our city’s rampant roaches. First up is a cockroach I saw in Wanchai last year, an image that I will never forget as it was such a vivid one.

I was on Jaffe Road right across Joe Bananas when I looked down before crossing the street. And, there, right next to my foot was a dead cockroach on its back, clutching onto a cigarette butt. I kid you not, his six legs were literally wrapped around the cigarette butt! 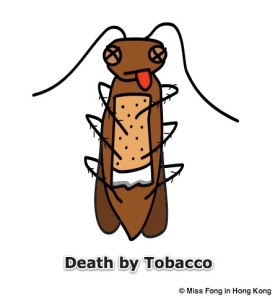 It’s clear how this cockroach died: death by tobacco. After a long night of partying with the call girls in Wanchai, this roach thought of winding down with a still-lit cigarette butt that landed just a few inches from him. After taking one long puff, he choked to death on all the nicotine, smoke and tar that filled his little lungs. So, the lesson here is, hanging out in Wanchai will kill ya!
November 7, 2011April 25, 2020 | Erica Fong

The other day, I was walking along the bridge to Central Pier when I came across a Hong Kong beggar lying face down near the entrance to IFC on the Apple Store side. He seemed “normal” enough: missing both legs, dressed in dark clothing, with disheveled short black hair. As usual, no one took notice, and since I was in a rush to get to The Watermark, I sped walked my way past too.

On my way back though about an hour later, I found myself walking behind a guy in a mini-buggy, which was essentially a motorized red tin box on three wheels, and guess who was driving? The same legless beggar as before!! 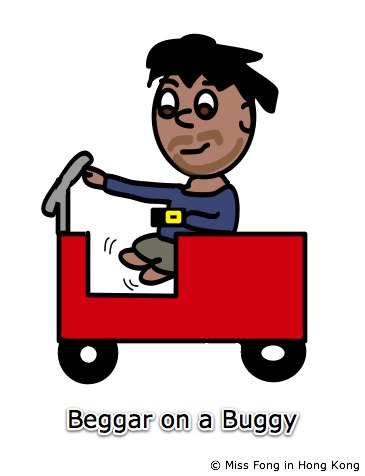 Usually, I try not to stare long or do double takes with beggars since it might make them self conscious, but I couldn’t help it when I walked past this beggar on a buggy. Not only was he in possession of a pretty awesome ride, he was also checking text messages on his phone, which despite being a Nokia had a pretty pimpin’ gold keypad.

I walked next to his buggy for a while to see if I could read his text messages (I couldn’t), and to verify if it was in fact the same guy, which I’m pretty sure of since he was missing legs at the same spot as the other guy.

Suddenly, I didn’t feel so bad for him anymore. Could it be, that he is perfectly okay with the way he is? Texting his wife to tell her he’ll be home tonight earlier than usual? Or is he plotting with his pimp where he’ll lie face down to pull at our heart strings next? And … where does he usually hide his buggy? Oh mysteries…