A friend of mine was visiting HK a couple months ago when he noticed some locals wearing thick plastic framed glasses without any lenses. Over a bubbling pot of pork bone soup, he asked me, “What’s the point of wearing glasses with no lenses?!” At the time, I thought it was pretty redonkulous too, but now that I’ve had a few months to think about it, I have to say that there’s absolutely nothing wrong with it! 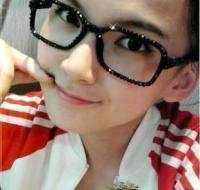 See, the trend of wearing nerdy glasses came to Hong Kong via our lovely neighbors Japan and Korea, where cute girls would strike unbearably cute wide-eyed poses with oversized glasses to become (if possible) even cuter. Soon, many HK girls were seen wearing these glasses all over town, first with fake plastic lenses, but soon without any lenses since they were fake and useless anyway.

At first, I thought it was kind of shallow to wear glasses without real lenses or any at all, and even though I did end up buying a pair with clear lenses (yea so what!?!), I always told people that they were prescripted. For whatever reason, I was embarrassed to admit that I was only wearing them for fashion, to look smarter or simply look a bit different that day.

It turns out that the ‘glasses with no lenses‘ discussion is quite a heated one, where REAL glasses wearers lash out at so-called posers with comments like:

But let me ask you this, is there really a point to ANY fashion trend? That isn’t fake or pretending to be something else? Like, when someone starts wearing a leather biker jacket, do the people who have been wearing leather biker jackets for years say, “OMG, those other people wearing leather now are SO fake! They don’t even ride bikes! They should go back to denim and stop mocking us!”

And what about wearing accessories like earrings, belts or headbands? Do people ever say, “Why are you wearing earrings? They serve no purpose at all! How vain can you get!?!” If everyone thought like that, we’d probably all be ‘too embarrassed’ to decorate ourselves with anything more than plain t-shirts and jeans.

The fact is, everything we wear these days, whether it’s a Nike t-shirt (why not Adidas or Puma?!) or sparkly sequined top (are you trying to blind me?!) serves no real purpose other than fashion. The only difference is that in Hong Kong, there seems to be less rules on what can become a fashion statement (just look at these cast-inspired sandals)! So, to get back to the glasses… please fake yourselves out!!

5 thoughts on “Fashion is fake”