The other day I was at the Mong Kok Computer Centre with two friends (S&A), who were both looking to buy a new digital camera. They already had a camera in mind (the Canon 880) so we were just going around comparing prices. At Broadway, the camera was around 2700 HKD but now we were seeing the ‘water product’ version for around 1700 HKD. (TIP! Basically ‘water product’ is a different version of the camera that doesn’t come with a warranty from the camera company itself, but you still get a year warranty from the shop that sells it to you. It’s much cheaper this way and better for people living outside of HK since you aren’t covered by the warranty anyway.)

One of the stores we stopped in was run by a slow, toad-like Chinese man in his late 30s(?) who had bulging, droopy-lid eyes and a brown sweatshirt. He showed us the Canon 880, gave us a decent price, and S&A decided to take two. The guy picks up the phone and tells his staff to get two from the storage room.

However, he then says, ‘Why don’t I show you this camera while you’re waiting,’ and takes out a Nikon camera, which he says is on a Xmas promotion right now for a very good price. He proceeds to show us how nice the camera is, and starts taking pictures to show us the quality. Somehow, its pictures are incredibly sharp, clear and way more beautiful compared to the Canon! Suddenly, S&A are not sure which camera to buy anymore. Should they go with all the reviews they read in the magazines, or go with the now “better camera”, according to this guy (who says he has so much experience with cameras and knows which ones are best)?? 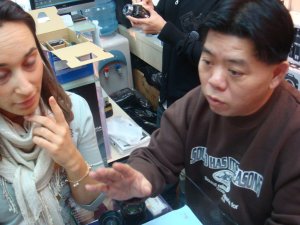 About an hour passes as confusion ensues, and the two Canon cameras are nowhere to be seen. The toad-man isn’t pushy at all, and gives us all the time in the world to go back and forth between the two cameras, rating the pros and cons. In the end, S&A still decide on the Canon, and the man gets back on the phone.

Two minutes later, he tells us that he has no more Canons in stock, and if they want to buy the Nikon, he will give them an even better price. After considering it for a while, we decided to move on and find another store.

At the next store, S&A got to try out another Canon 880, and this time, the pictures were incredibly sharp and beautiful! We asked if the Nikon was better, and right away, the salesman said, “That’s what he told you, right?” pointing towards the previous shopowner in the brown sweatshirt. “Of cos he want you to fink that, he want to sell Nikon camera, hiya maak-up! Don’t buy from him, he do monkey business, monkey business!” So apparently, he had played with some settings on his Canon camera to make all the pictures look bad!! What a crook!!!

I asked the salesman why he didn’t expose him up front so that no more customers would get tricked, but he just said that it was a free market, and everyone just does their own thing. But anyway, as S&A purchased their cameras from the new store, we cast some evil glares his way. I’ll try to post a picture of him soon so no one else gets tricked!!

One thought on “Monkey Business”

"If you want it, go for it!" -Anonymous 🙌 #MaLaiGoForIt #DimsumWisdom . . Like & share on your stories if you agree! 🤗 . . #malaigo #spongecake #dimsum #illo #cartoon #illustration #illustrator #doodles #hk #hongkongfood #dimsumlover #hkig #hkfood #missfonginhk #cute #drawing #dimsumtime
We're back with a new #DimsumWisdom series! #BeTransparent . "A lack of transparency results in distrust and a deep sense of insecurity."—Dalai Lama . Do you agree? Double tap if you want more #DimsumWisdom! :) . #hargow #dimsum #cartoon #illustration #shrimpdumpling #dumpling #doodle #drawing #digitalart #illo #cute #quote #dalailama #transparency #qotd
We are back at the @handmadehongkong December market today in #DiscoveryBay 🎅 Come visit us at stall 89A for some exclusive Christmas deals! . . . #hk #handmadehongkong #market #handmadehk #illustrator #design #cartoon #drawing #hongkongmade #madeinhk #madeinhongkong #merrychristmas #christmas #Xmas #Xmasmarket
Come find us at @thehivestudioshk in Kennedy Town today from 11am to 8pm for all your Xmas shopping needs! 🎄